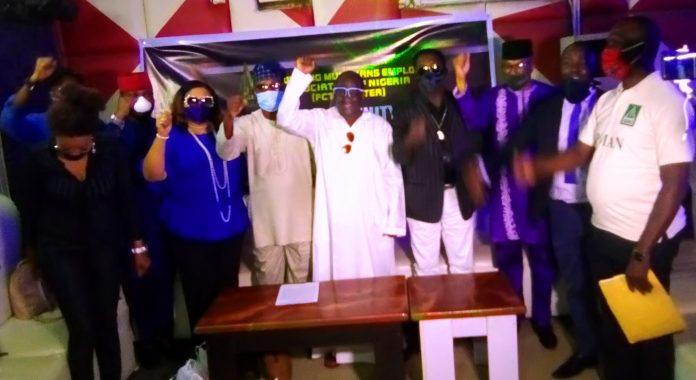 The factional leaders of the FCT Performing Musicians Association of Nigeria (PMAN), on Wednesday decided to sheath sword as Prince Solomon Nda-Isiah and Queen Julieta Ofuyeta led factions’ finally embraced peace for the growth of the association in the federal capital territory.

Corereporters report that as part of the reconciliation,  members of the two factions also agree for the association election to hold in January, 2021.

At a press conference in Abuja, the chairman of  Performing Musicians Association of Nigeria (PMAN) Stakeholder’s forum, Comrade  Dovie Mena aka Baba Baba 2010 during a reconciliation meeting said, musicians most especially PMAN FCT chapter need to come together to ensure that the industry and Nigeria in general remain united for sustainable development.

“Comrade Mena said, “I am seeing the light at the end of the tunnel because today (Wednesday) is a memorable day in the history of PMAN FCT chapter as Prince Solomon Nda-Isiah and Queen Julietal Ofuyeta led faction came together for a common purpose of taking the industry to the next level.”

Mr. Nda-Isiah, FCT PMAN governor said he was satisfied with the reconciliation that took place between him and the factional FCT PMAN governor, Ofuyeta, adding that the move was in the right direction.

Nda-Isiah lamented the challenges the crisis has caused the association  over the years, while stressing that with the latest move PMAN will reclaimed it lost glories.

In the same vein, Ofuyeta noted that, the crisis actually brought the association down in all ramifications, stressing that they (FCT PMAN) were short out of the Covid-19 Palliatives.

She added that, with the current reconciliation that took place on Wednesday, she is  sure that FCT PMAN will recover its  lost glory..

NFF President to meet Professional footballers on Tuesday in Abuja

CAF CL: Plateau United vs Simba SC to be...