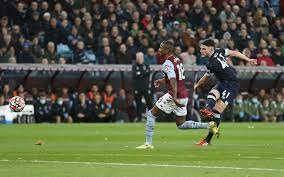 As the game resumed in the second stanza, Aston Villa Ezri Konsa was given a matching order ten minutes into the second half.

Pablo Fornals and Jarrod Bowen scored in 80th and 84th minute respectively to give the visitors a comfortable 4-1 win and maintained their top-four position at the EPL table.

Gov. Sule to embark on appreciation tour of LGAs…Presents 25 Lexus...