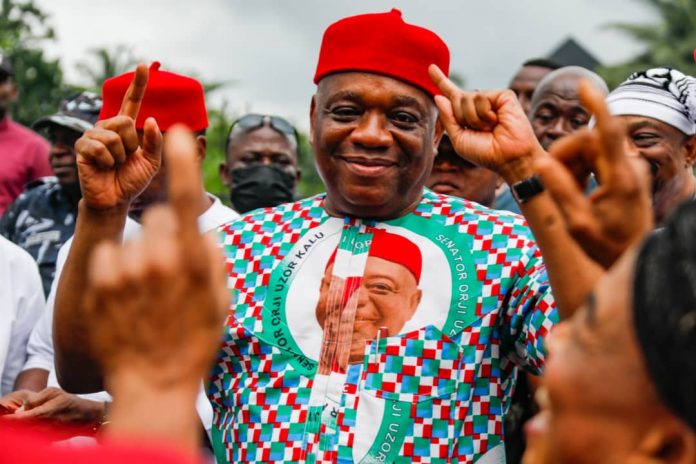 Presently,  the ongoing 2km Umueze Obinolu road being constructed with double drainages has reached its advanced stage with accelerated laying of Asphalt. The development has since thrown the community into massive Jubilation being the first of its kind since the existence of the community.
In a brief chat with the Sun , a community youth stakeholder identified as Comrade Paul eulogised Senator Kalu commending him for the durability of the work being done.
According to Paul the entire community were indeed grateful to Kalu for remembering them in his infrastructural development drive in Abia North.
Paul declared the resolve of the community to reward Kalu with their votes; “Since I was born I’ve never seen a tarred road in this community. The Traditional leaders and the entire villagers will forever remain grateful to Kalu because this project will improve our economic activities. I am happy I’m alive to witness this happening with my two eyes.
“This Road is just one aspect,  Kalu has worked on our schools,  installed solar powered street lights to improve our security,  his tenure at the Senate is satisfactory and we assure him of our votes in the forthcoming elections”.
Others who spoke said completed and ongoing road projects delivered with drainage were the best dividend of democracy they’ve ever received in their entire history.
Asides the construction of schools, health centers and provision of motorised pipe borne water for communities, Kalu  in over three and half years facilitated the construction of over 60 roads spread across rural communities in Abia North.
On Education Kalu also facilitated the construction and reconstruction of Schools coupled with the distribution of learning at various schools in Umunneochi. Some of the beneficiary Schools are; Isuochi secondary School ( Methodist secondary school) at Nkwoagu isuochi; Umuaku Secondary School; Umulem central school;.Isuochi (Ngodo) technical school; Umuaku central School; Lomara secondary school; Lokpanta primary school; Lekwesi central school; Ugwu leru primary school;.Nneato central school; Maria Assumpta primary school Eziama Nneato; Holy rosary secondary school, Obulo Nneato;.Eziama central school; Nneato Central school, Ebelebe and Ndi Awa secondary school, Isuochi and others.