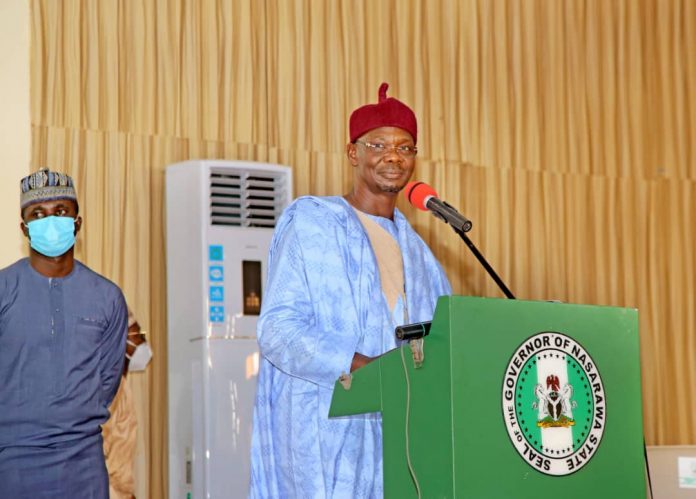 The Governor of Nasarawa State, Engineer Abdullahi Sule, has launched the measles second dose MCV2 immunization, into routine immunization schedule, aimed at reducing the prevalence of measles in children under the age of five.

Engineer Sule flagged off the exercise at a ceremony that took place in Kana/Apau, in Kokona Local Government Area of the state on Monday.

The Governor, at the event, equally commissioned and took over an ultra modern primary healthcare facility, constructed through the Save One Million Lives initiative, supported by the World Bank, aimed at strengthening the capacity, as well as improving the provision of quality healthcare in the state.

While launching the second dose of the measles immunization, Engineer Sule, said the exercise is meant to address inadequacies from the first dose of the measles vaccines, towards conferring optimal protection against the disease, for children in their second year.

The Governor pointed out that measles is a devastating disease and has remained a major public health challenge, with statistics showing that approximately over 246 children die each day from measles, with majority of the cases recorded in Africa, especially in Nigeria.

According to Engr. Sule, “it’s disheartening that measles has remained a major cause of concern for Nigeria because over 17000 cases of the disease are recorded daily, with fatality rate of 12.4% in the North, compared to only 1.9% in the South.

“This should be a major concern for Governor’s and especially to Governors in Northern Nigeria,” he stated.

The Governor noted that it has therefore become necessary to introduce the second phase of the dose into routine immunization schedule, to help increase its immunity conferred by the vaccine, which gives children under the age of five better chance of survival.

He emphasized that his administration recognized the urgent need to curb the high rate of childhood deaths, disability and illness, in line with the Save One Million Lives initiative.

Engr. Sule added that, and to this end, his administration is committed towards strengthening the Nasarawa State Primary Healthcare Development Agency, to deliver its statutory responsibility of delivering quality primary healthcare services for the people at the grass root.

The Governor however appealed to all mother’s and care givers, to make their children between the age of nine and 15 months, available for vaccination at the nearest facility, during the outreach services that is commencing.

He equally appealed to political, religious leaders, as well as traditional rulers, to be fully involved in sanitizing their people for the immunization exercise, urging them to assist the government by resolving defaulters and non compliance cases.

On the newly commissioned primary healthcare facility,  Engineer Sule, while thanking the Save the One Million Lives initiative,  the World Bank and the Alhaji Abubakar Kana family, for constructing the edifice, reiterated the commitment of his administration to upgrading of all healthcare centres across the 13 local government areas, for effective and efficient service delivery.

Earlier, the Minister of Health, Dr. Osagie Ehanire, in a goodwill message, said since the inception of the President Muhammadu Buhari administration, efforts have been put in place to address issues of healthcare in the country, with huge resources devoted to the sector.

Dr. Ehanire, who was represented at the event by Dr. Ibrahim Kana, National Program Manager, Saving One Million Lives Programme for Result, a World Bank assisted programme, noted that Nigeria has attained the elimination of polio, with continuous improvement in immunization coverage being recorded in the country.

A representative of development partners working in the state said the second dose of measles immunization is aimed at reducing mortality and morbidity amongst children.

She added that the primary healthcare facility was constructed by the Save One Million Lives initiative, in order to serve the people of the community towards ensuring that primary health care services, which include. Immunization, antenatal, delivery and treatment of minor ailments, is well taken care of.

Highlights of the event, witnessed the Alhaji Abubakar Kana family donate an ambulance to the newly commissioned primary healthcare facility in Kana/Apau.

WHO donates 1.5m doses of cholera vaccine to Bauchi