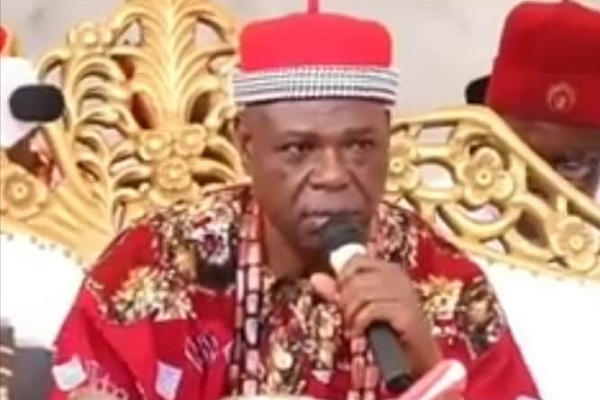 The deposed traditional ruler of Ukwulu Kingdom in Dunukofia Local Government Area, Anambra state, His Royal Highness, Igwe Peter Uyanwa has dared Gov, Willy Obiano said saying he remained the king of his kingdom, adding that no one can remove him from the throne.

“As a traditional ruler, I give honour to whom it is due. But I cannot keep quiet when I am seeing somethings going wrong in my state as well as my kingdom ,” he said.

However, Anambra State commissioner for Local Government Chieftaincy and Community Affairs, Mr. Greg Obi has recently issued a statement on the directive of the state governor, Willy Obiano suspending Igwe Uyanwa for one year starting from July 24, 2020.

In the statement Mr. Obi, said that the suspension was in line with the powers given to the Executive Governor of Anambra State under Section 10 (B) of the Anambra State Traditional Rulers Law 1981.

The statement said the sanction may be lifted at the end of one year or renewed, or upgraded in the intervening period depending on the government’s review of Igwe Uyanwa’s conduct.

The statement further directed Igwe Uyanwa to stop holding himself as a traditional ruler and to cease from discharging traditional ruler’s function in Ukwulu community, or elsewhere in the state and beyond.

But, the alleged deposed King of Ukulu has posited that Gov. Obiano is after him because he stands for the truth. He noted that because they pointed out some anomalies in the state which includes a 5% budget for traditional rulers which is not implemented in the state.

He said, “Another offence we allegedly committed was that our brother, Prince Arthur Eze attracted the Zone 13 Police headquarters to Anambra State and he invited us to his palace to celebrate the development which we did because that was a urged development in the south east.

Meanwhile, the State Commissioner for Information and Public Enlightenment, C-Don Adinuba, said the government took the action following a series of petitions against the traditional ruler from many people in Ukwulu and elsewhere who want to forestall an impending crisis in the community.

He said the appropriate security agencies have been notified of the development.

It will be recalled, Igwe Uyanwa had in recent times, been at the vanguard of speaking out against alleged under performances by the Obiano administration as well as openly opposed the zoning of the 2021 governorship seat in the state to Anambra South Senatorial District.

Pastor Adeboye says victory against insecurity around the corner

House of Reps Investigates Alleged Shady Deal in Ministry of...

Gov. Sule condoles with families, leadership of NNPP over death of...