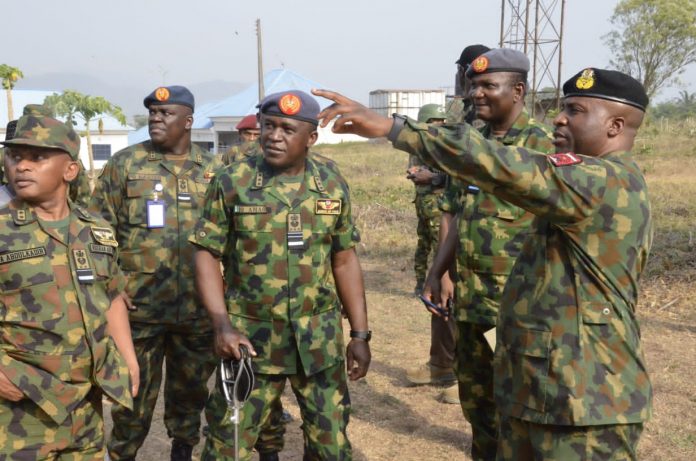 The Chief of the Air Staff (CAS), Air Marshal Oladayo Amao, has  said that the Nigerian Air Force (NAF) has operationalized the usage of all its new and modern platforms towards tackling terrorism and insurgency in the country.
The CAS who was speaking during an operational visit to the Nigerian Air Force Institute of Safety and 209  Quick Response Group, Ipetu-Ijesa, Osun State on Friday stated that the NAF in recent time, has  effectively operationalized the  usage of new and modern platform in the battlefield.
According to him, these new and modern air assets are  instrumental in the feats  being recorded against terrorists and insurgents.  Air Marshal Amao, attributed the successes recorded by the NAF in the theatres of operation to the newly acquired JF-17 Thunder aircraft, A-29 Super Tucano aircraft and the Unmanned Combat Aerial Vehicles. He maintained that the Nigerian military is winning the war against terrorism in the country, with the aid of these modem platforms.
He  emphasized that more still need to be done to completely decimate and flush out the remnants of terrorists still preying on soft targets. He however warned that being complacent at this point would be harmful to ongoing operations and called for more focus, vigilance and caution.The CAS revealed that the NAF is expecting the delivery of additional new platforms which the President has approved for the Service.
The air assets, according to him,   include:  2 Beechcraft King Air 360, 4 Diamond DA-62 surveillance aircraft, 3 Wing Loong II UCAVs and 6 T-129 ATAK helicopters.  He further  disclosed that there are  ongoing acquisitions of 12 Agusta 109 Trekker multi-role helicopters and 24 M-346 attack aircraft. He added that some of these additional platforms are expected to be delivered to the NAF before the end of first quarter 2023. This, he said would further boost NAF’s air power employment and projection capabilities as well as air combat training.
Commenting on the upcoming general elections, the CAS urged NAF personnel to remain apolitical but only  exercise their legal franchise which is the constitutional right to vote for any candidate of their choice. “we must continue to maintain our integrity and neutrality as a Service,” the CAS stressed.
He further urged NAF personnel to remember that as custodians of Nigeria’s constitution, they must ensure that  public perception of the NAF and the Armed Forces of Nigeria remains positive and unblemished.
The CAS was accompanied by the Air Officers Commanding Special Operations Command, Air Training Command, some Branch Chiefs and Directors from Headquarters NAF.

2023: Tinubu pray, pray, your enemies coming after your soul-Prophet Mongbo...

VICOSA ‘LL BENEFIT FROM MY WEALTH OF EXPERIENCE – Dr. Enahoro