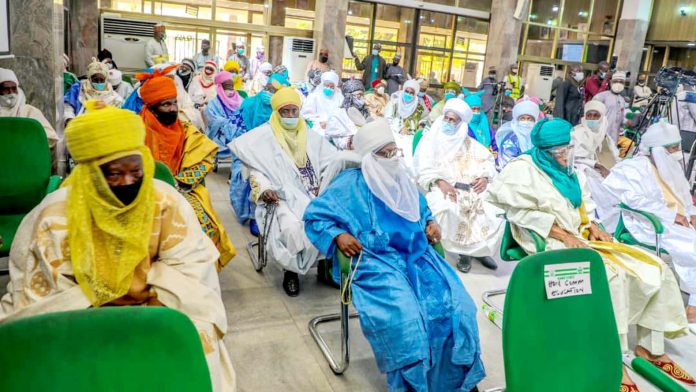 A cross-section of some traditional rulers from Kano State during their meeting with Gov. Umar Ganduje, where the Governor briefed them on the second wave of COVID-19 and sought for their support and collaboration in the fight against the pandemic, in Kano on Wednesday PHOTO: BJO, NAN

The Kano State Government says it has recorded 17 deaths and 827 new cases between November 2020 and January.

Dr Sabitu Shanono, the Deputy Coordinator, Technical Response of the state task force on COVID -19, disclosed this during a sensitisation meeting with five Emirs and 50 district heads in the state.

“From November, 2020 to January, 2021, the state has also recorded 827 new cases since the coming of the second wave of the pandemic.

“Two hundred and eighty nine are still on admission receiving treatment, the state government has now recorded 71 total deaths since the index case that was recorded in April 2020,” he explained.

Shanono added that the state had recorded 5,083 contact tracing, adding that there were 61, 997 suspected cases.

He said that the state had also recorded 2, 636 confirmed cases while 2, 276 were discharged.

He, however, lamented that the state was facing the challenges of poor public compliance with Infection Prevention and Control protocols, as people in the state were not observing the safety measures properly.

In a remark, Gov. Abdullahi Ganduje disclosed that the state government had made an arrangement to start testing people entering the state from border towns in order to check the spread of the pandemic in the state.

Ganduje also said that the government had engaged the security agencies while a template had been designed for enforcement of compliance to COVID-19 protocols in the state.

According to him, the state government decided to engage traditional rulers and ulamas in the state because they were respected and people listened to them.

The committee also had a similar meeting with the council of Ulama and 44 local government chairmen in the state.

Ganduje urged them to go back to their respective communities and enlighten their people on the dangers of the pandemic and ways to prevent and protect themselves.

“We are also going to engage different stakeholders in order to enforce compliance to the protocols,” he explained.

The governor added that the state government would distribute two million face masks across the five emirate councils in the state.(NAN)

Just in…. Idoko sacked as Lobi Stars Vice Chairman, Aondofa may step in