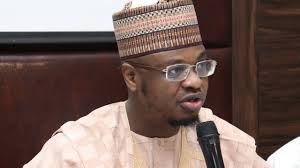 The pan –Yoruba socio-cultural organization, Afenifere, Ohanaeze Ndigbo, Christian Association of Nigeria (CAN) and female activist and social media influencer, Aisha Yesufu have demanded the sacking of the Minister of Communications and Digital Economy, Dr. Isa Pantami, by President Muhammadu Buhari, over his alleged links and sympathy for extremist Islamic groups.

Speaking to our reporters in separate interviews, Afenifere, Ohanaeze, CAN and Yesufu, declared that since the minister had refused to resign from office, after his links and sympathy to militant Islamic groups became public, the Buhari administration should act proactively by shoving him from office.

Keeping him in office against the court of public opinion, they argued, indicated that the Buhari administration had a soft spot for promoters of religious extremism and considered the views of Nigerians as irrelevant, warning that retaining him in office would send the wrong signals to the international community. General Secretary of Afenifere, Basorun Sehinde Arogbofa, in his reaction, said that “from all we know, we are told that he is a security threat and if the government is saying otherwise, it is very disturbing.

“I think when they see somebody as a security threat any proactive government should take it seriously. If the affected doesn’t see it wise to leave office honourably, the government, if it is proactive and serious, should show such a person the way out. “It is not a question of defending, I think the first thing should have been to step aside; go and defend yourself, clear yourself very well. And if the government is convinced, the government can say, okay, come back.

I think that should be the situation. It is a serious matter and we should not just cover it up. Whether it is a serious allegation or a spurious one, an allegation is an allegation.” In its reaction, National Vice Chairman, Ohaneze Ndigbo, Dr. Okeke Ogene, said the extreme religious views of the minister is a security issue, asserting that the security agencies know what to do. “Ohaneze Ndigsocial-culturalcultural organization and not a political outfit. Again, we don’t subscribe to accusations. If there is proof of that, the Federal Government knows what to do. “It is a security issue and we must have a fact before we speak. We are not politicians, and we cannot be forcefully dragged into politics,” Ogene noted. Also, Bayo Oladeji, the media aide to the CAN President, Rev. Olasupo Ayokunle indicted the Presidency over its handling of the Pantami scandal so far, stating that it’s an indication the administration is unserious about its fight against insurgency.

“In an ideal situation; in a civilised world, someone like that minister is supposed to have been retired and be investigated. His eminence said it two days ago in Lagos, the Department of State Services (DSS), the Nigeria Intelligence Agency (NIA), and all the related security agencies should invite the man and he should be investigated. They should ask those who might have any information about it and they should come out. “But, if the government can be protecting a suspect, something is wrong with that suspect.

That is our position. Here is a country that has bandits and terrorists killing, kidnappers are killing and we find somebody that is being indicted; and this allegation is real. The right thing is let them investigate it first. “Is this how to fight terrorism? Is this how to fight banditry? We call on President Muhammadu Buhari to live above board, let people see that he is sincere. Any of his aides that is indicted or accused of one thing or the other, let the person face the wrath of the law. Let him be investigated and once it is established that it is true, then the person should be given the right treatment. “But by protecting him, they are not helping the image of the government.

They are not helping the image of the country. So, we appeal to the Federal Government that it is high time they stopped protecting any suspect in the government, so through their actions, and reactions people can take them seriously. “The issue of Pantami must not be swept under the carpet, if they are to be taken seriously. Look at what is happening now, all the big companies in the West prefer Ghana as headquarters in West Africa. The implication is that Ghana is safer than Nigeria. It is well with Nigeria,” Oladeji said. While condemning the Presidency’s stance on Pantami, Aisha Yesufu, said it would be unfair if Nigerians perceive that the Presidency is supporting someone who is known to have been a terrorist sympathizer.

“We cannot be a nation that allows people who support terrorism to be out there in our public domain as public servants. We cannot have a minister of a sector that is so sensitive who is a terrorist sympathizer whether he has been or still is or whether he repented or is unrepented. That is not the issue. “The issue is that our Presidency which is an institution, must not be seen in any way as supporting or conniving with a terrorist sympathizer. You cannot tell me that Isa Pantami was a child when he made that statement. He was a fullfledged adult. I was pregnant with my last child when 9/11 happened. “The child is going to be 20 in December. The child is already an adult not to talk of someone who was already my age as of that time. I was born in 1973 and that’s about the same time Pantami was born. So he was not a child. He knew what he was doing but today, he has been found out and is apologizing which is not a reason for the Presidency to come out and make the statement they released signed by Garba Shehu. “We must not be a nation that allows terrorists and those who sympathize with them to be our ministers or be in public offices.

How do you think they are going to look at us around the world? “That you come from a country of terrorism or a government that has been behaving in a terrorist manner by supporting those supporting terrorism. For how long has he been blackmailed with this information? “For how long has our country been put in dire situation because of the information? How do we continue like this? The Presidency should not dare the people of Nigeria. Let me tell you, this affects everyone of us,” the activist said. However, when contacted, Emmanuel Yawe, the spokesperson for the Arewa Consultative Forum (ACF), said the body had yet to take a position on the issue. “I have been asked this question a couple of times. However, the Arewa Consultative Forum (ACF) is yet to discuss it and take a position,” he replied.