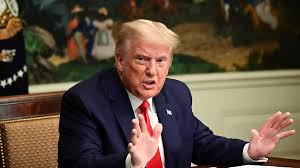 By Gabriel Kekong with Agency Report

Donald Trump is looking ‘very seriously’ at running for president again in 2024, he announced on Monday night, as he attacked Joe Biden for his handling of the southern border and returned to his 2016 campaign warning that Latin America was ‘sending rapists’ into the United States.

In his first televised interview since leaving the White House, Trump told Fox News‘ Sean Hannity that he was definitely weighing up a bid to retake the presidency.

‘I am looking at it very seriously,’ he said. ‘Beyond seriously.’

The former president also attacked the FDA, saying that the agency is protecting Pfizer by choosing to halt Johnson & Johnson’s vaccination program.

He said he believed his high poll ratings – what he termed his ‘tremendous numbers’ – was due to disappointment in Biden’s rule.

‘I’ve got tremendous numbers. Nobody has ever gotten the numbers I got. No sitting president has come even close. There is more popularity now the end there was the day before the election,’ he said.

But, the 74-year-old said he was not ready to officially declare his candidacy. ‘From a legal standpoint, I don’t want to really talk about it yet,’ he added.

Trump, speaking from his Mar-a-Lago estate in Florida, said that he was most proud of ‘helping people’.

He singled out having reduced taxes, reduced the cost of prescription drugs, created Space Force, and built parts of a wall along the border with Mexico.

The former president said he build 450 miles: the vast majority of the 450 miles was in fact repair or reinforcement of existing structures, and only 80 miles was newly created in locations where no barriers previously existed.

He said that his immigration policies were working, telling Hannity that Biden’s unpicking of his work was having a devastating effect.

More than 170,000 migrants were taken into custody at the U.S.-Mexico border in March – the highest monthly total since at least 2006.

Buhari to present 2021 budget next week..As Senate confirms receipt of...

Can Angya change the Benue Narrative?